Carina Bruwer completed a quadruple (4-way) crossing of the Messina Straits, swimming from Sicily to Italy and back twice, in 3h59. This makes her the first female to do a more than a double crossing of these famous straits, known for its strong currents and tides. The total distance swum was 14,2km – although the shortest distance across the strait is 3,2km, swimming a strait line is impossible due to the currents. Taking part in the challenge with Carina was internationally renowned Irish open water swimmer Ned Denison, who completed the swim in 3h57. 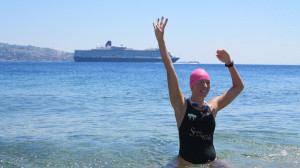 This record setting “Swim for Hope”, in support of the Little Fighters Cancer Trust (a South African organisation that supports children with cancer and their families), comes just 4 days after Carina completed a dramatic crossing of the Bonifacio Straits on Tuesday 17 June, swimming 15km from Corsica (France) to Sardinia (Italy) in challenging conditions.

The local support crew, Baia Di Grotta, postponed the quadruple crossing, which was originally planned for Friday, to Saturday due to strong winds which would have swept the swimmers out of the straits. The strait is characterized by strong tidal currents, that established a unique marine ecosystem. A natural whirlpool in the Northern portion of the strait has been linked to the Greek legend of Scylla and Charybdis. “The weather on Friday was terrible; I was getting quite nervous when I saw the water, which looked like a washing machine! Today was rough in places, but overall conditions were good and I had a wonderful swim”, Carina said. 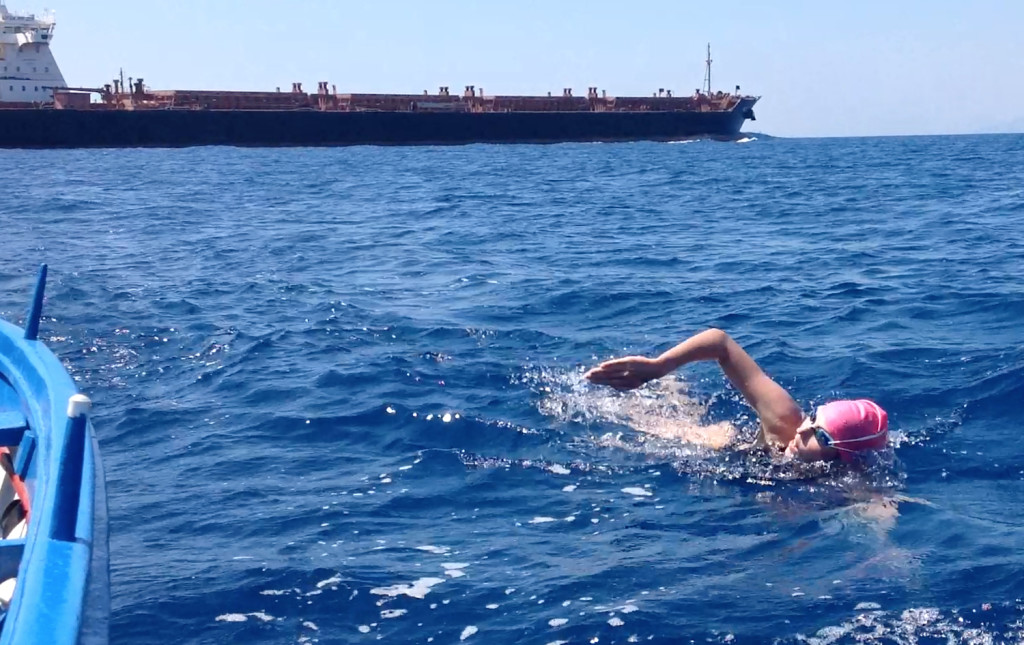 Footage of the Quadruple Messina Straits crossing is available on request

Carina completed the Bonifacio Straits crossing on Tuesday 17 June, which had been done before by a few Europeans using aids (wetsuits, flippers, etc) and by only a handful of swimmers according to international open water swimming rules (which entails swimming without a wetsuit or any other aids), in 4h28, after fighting high seas and strong headwinds for the last 6km of the swim. “Conditions were tough”, Carina said. “Sardinia experienced unseasonal thunderstorms and sporadic flooding earlier in the week so I was relieved to get a window in which to swim on Tuesday, and all started out well with flat seas, but halfway through the weather took a turn for the worst and I honestly didn’t know whether it would be possible to complete the distance. I couldn’tsee my support boat behind the waves, and waves were crashing on me – I didn’t actually know whether I was moving forward! I wasn’t going to give up though, as in the back of my mind was always the little cancer fighters for whom I’m swimming. It was a huge relief when I finally saw the beach, and completed the swim.”

Carina was a household name in open water swimming circles across the world even before she became prominent as a musician. She competed in 7 countries between 2004 and 2006 winning numerous races, completing solo crossings such as the English Channel, Gibraltar Straits and False Bay; breaking nearly a dozen records (national and international), and enjoying significant national and international media coverage. In 2007 she founded instrumental pop group Sterling EQ which, under Carina’s guidance, became a headliner in the South African music industry, winning numerous awards and touring nationally and internationally.

After taking a break from open water swimming due to a rigorous touring schedule as well as having started a family in 2008, Carina returned to the sport in 2013 by launching “Swim For Hope” through a dramatic and widely publicized solo rounding of Cape Point for LFCT, raising R17,000. In March 2014, Swim For Hope returned as a group rounding of Cape Point with 14 extreme swimmers raising over R115,000 plus widespread child cancer awareness, and Carina now plans to dedicate a large portion of her big solo swims to Little Fighters Cancer Trust by swimming under the Swim For Hope banner, and inviting fellow extreme swimmers to do so too.

“Childhood cancer has a desperate effect on the whole family like no other cancer”, says Carina. “There are many people – especially sufferers themselves – rallying and doing amazing work for breast cancer and other chronic diseases, but children do not have the same voice nor the ability to spread awareness, making it incredibly challenging for childhood cancer fighters to get the message across and raise much needed funds. Having two perfectly healthy children myself, I simply could not remain untouched by LFCT’s work and the cause, and making a small difference to them has made a big difference in my own life. In South Africa, the limited resources are shared between AIDS, Adult Cancers and diseases such as Tuberculosis and Malaria, with child cancer being in dire need of awareness campaigns and support structures. I’m therefore hoping to create some international awareness and support through my European swims”.

Mandie Erasmus, LFCT’s project manager, said “It amazes me every time that Carina steps up for our cause, at times braving dangerous conditions, to promote childhood cancer awareness, and raising funds for the work we do. Childhood Cancer is a silent killer in South Africa. Less than a third of actual childhood cancer cases in South Africa are diagnosed annually, mainly due to a lack of awareness. In the Developed World, which includes Europe and the US, the success rate of childhood cancer treatment is between 80 and 90%. South Africa shares the success rate of the Developing World, which is a mere 10 to 20%. This should not be, as 70% of all childhood cancers are 100% curable IF diagnosed in time. Carina and Swim for Hope, gives the Little Fighters Cancer Trust and the children of South Africa a Voice. Having a Voice, will lead to increased awareness, which in turn will lead to more children being diagnosed, and the entire aim of awareness, is to save lives”.

Public as well as corporate contributions are encouraged and can be made on www.justgiving.com/SwimForHope. Little Fighters Cancer Trust is a registered NPO with PBO status. Corporate sponsors can contact Mandie on 073 729 6155 or mandie@littlefighters.org.za for organizational information such as taxation and BEE benefits.