Carina Bruwer, one of South Africa’s most respected long distance open water swimmers, today became the 23 rd South African to successfully cross the English Channel, swimming the 36km from England to France in unpredictable conditions in a time of 12h03.

Carina started her attempt across the Channel at 08:30 this morning at Dover, England . This swim is widely regarded as the benchmark for open water swimmers and Carina was “nervous, but excited”. The water temperature was +- 15 degrees Celcius and conditions looked good for her attempt.

Carina completed the crossing in 12h03, and stepped out of the water in France just after 20:30 this evening. “I am absolutely ecstatic! Conditions were rough at times and the weather started to change towards late afternoon”, Carina said. “My support crew was fantastic and really kept me going throughout the crossing. This really was the big one, the swim that I have been working towards for a long time. I really struggled against the current for the last 5kms and I am tired and cold now, but feel a real sense of accomplishment at having completed the crossing!”

Carina is now the fastest South African woman to have crossed the Channel. 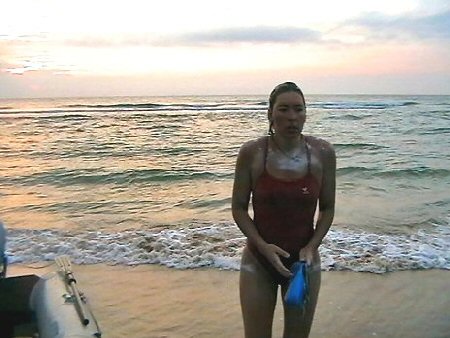 Carina was supported on the crossing by the English Channel Swimming Federation and the boat was piloted by Dave White and two other crew members. Also on the boat was Peter Bales from the Cape Long Distance Swimming Association, as well as an observer from the Federation.

On Friday 29 July, two other South Africans successfully crossed the Channel. Dion Woodborne, a vet from Hout Bay, managed to complete the swim in a time of 13h38, while Ilse Eiselen-Botes (who currently resides in Jersey, England), competed the swim in 12h58.

Recently Carina was the first female and fourth swimmer overall to complete the 25km International Swimming Crossing of the Toroneos Gulf in Greece last week. She came directly to Dover and has been on standby since Tuesday 26 July. A planned attempt on the 29 th was called off the night before due to possible strong winds later in the day. “I was a bit disappointed not being able to swim on the same day as Dion and Ilse, but also relieved because I hurt my left shoulder during the swim in Greece, and a couple of days’ rest has been good. Dion and Ilse both did amazing swims – conditions did become rough in the afternoon and they did so well to hang in there. The English Channel is the benchmark for open water solo swimmer across the World. Twenty-two South Africans have now completed the swim since Peggy Duncan in 1930 became the first South African to cross successfully in a time of 16h15.