When two of South Africa’s top instrumental virtuosos come together in the name of rock, chances are you will want to embrace a feeling of VeRTiGO! – and you can do so for one night only at Cafe Roux Cape Town on 15 August.

Celebrated flute virtuoso Carina Bruwer – one of only handful slide flute players in the world, who is also well-known for her record-breaking marathon swimming feats – joins forces with Mzansi guitar legend Mauritz Lotz, who has been nicknamed by the SA Rock Encyclopedia as “Guitar Hero Extraordinaire”.  Both are multiple award-winning artists, each with a unique musical artistry that defies definition but perfectly complement that of one another – both offering an impressive mix of extreme technical skill, raw musical passion and creativity which has earned them international acclaim.
One of the most unique flute players in the world today, Carina Bruwer is praised far and wide for her phenominal technique combined with her idiosyncratic improvisation skills and soulful interpretations rarely associated with this instrument.  Carina, who holds a BMus (Hons) cum laude and is also the leader and founder of Sterling EQ – the SAMA Award-winning all-woman trio known for coining the genre “instrumental pop” through their unique take on instrumental music – has recorded on over a dozen albums, performed in 15 countries both solo and as part of Sterling, collaborated and/or shared stages with world-famous artists including Boney M, Johnny Clegg and  Lira, and has won numerous awards for her work across the board.  With the use of her groundbreaking slide flute, she is able to make a traditionally delicate instrument sound truly rock-pop!
Mauritz Lotz is not only in a league of his own as a guitarist, he is also in high demand as a producer and composer across South Africa and abroad, and his work can be heard on over 4000 recordings. In a career spanning over 30 years, Mauritz Lotz has worked with many of SA’s top artists including Mango Groove, Miriam Makeba, Johannes Kerkorrel, Lucky Dube, Hugh Masekela, Coleske, Ringo, Ladysmith Black Mambazo and literally hundreds more. He has released 6 solo albums, and together with of his band “Razor” in the 90’s, he opened for and/or shared stages with international acts such as the Bee Gees, The Rolling Stones, Roberta Flack, Eric Clapton and Sting.  With his incredible flair and intimate proficiency with the instrument, it is no surprise that Mauritz is one of South Africa’s busiest and sought after session guitarists. See more on www.mauritzlotz.com.
VeRTiGO! Live at Café Roux is a one night only opportunity that will live with you for some time to come! The impressive duo’s set will include rock-pop classics such as Europa (Santana), While My Guitar Gently Weeps (Beatles), Fragile (Sting), some Classic fusion mix-ups as well as a couple of exciting Mauritz Lotz originals. 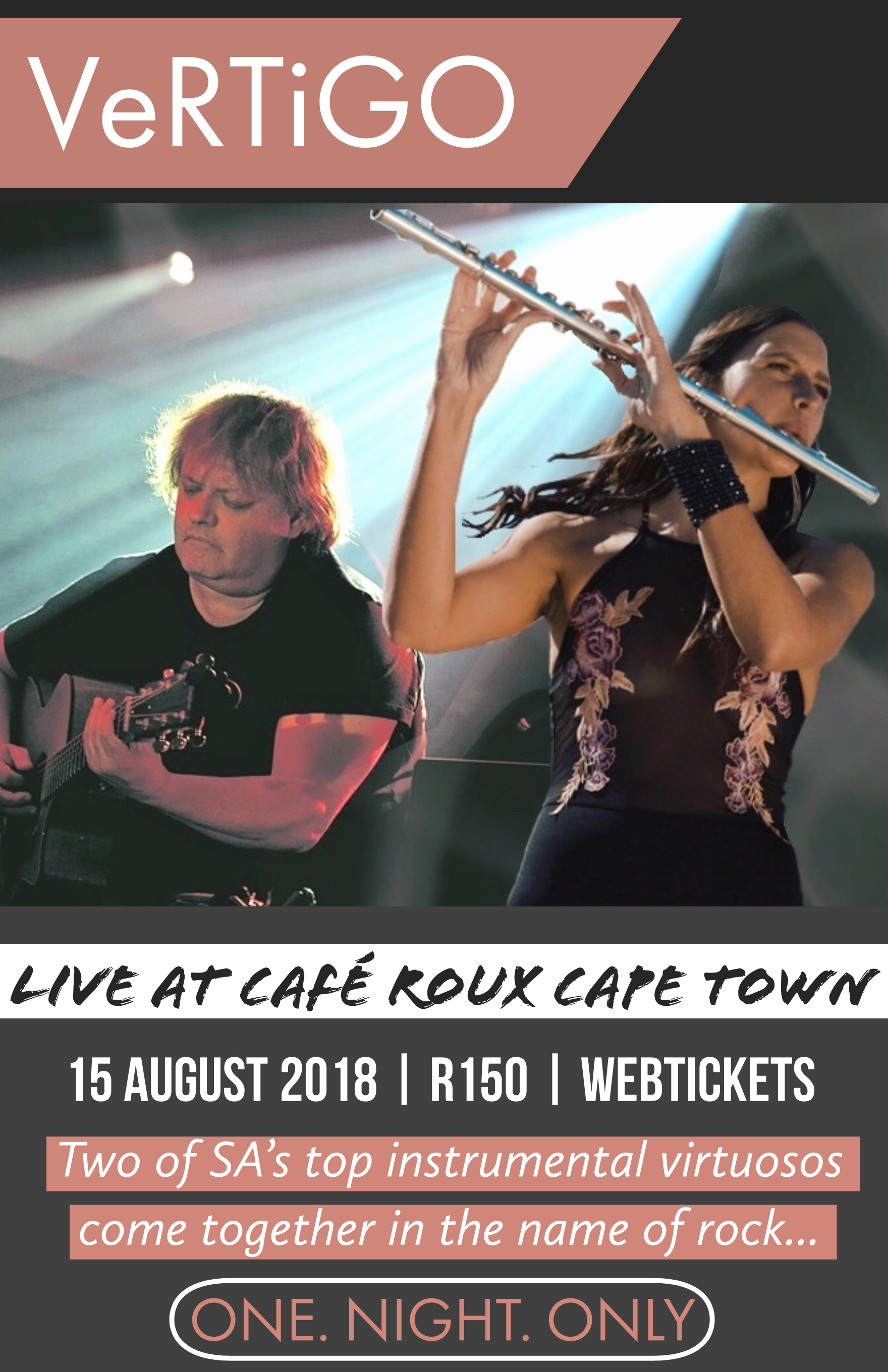