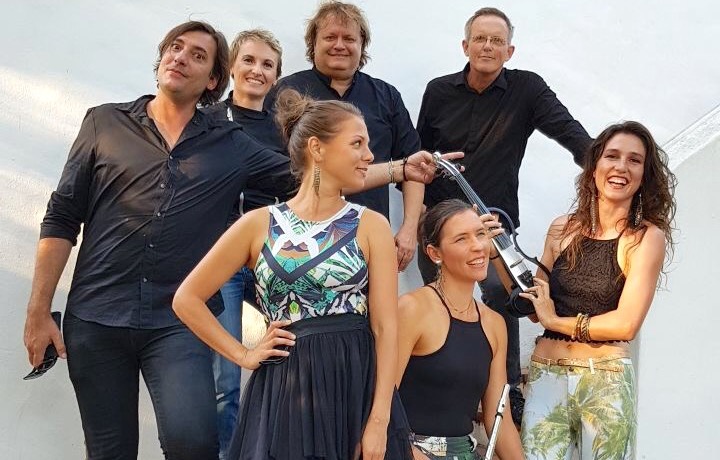 The multiple award-winning instrumental pop group Sterling EQ teams up with four of SA’s top instrumentalists for a celebration of all sounds instrumental – a one-of-a-kind entertainment offering for large and/or custom events and concerts.

The acclaimed Sterling EQ has performed in 13 countries and to audiences of thousands since their formation in 2007, and is lead by Carina Bruwer – acclaimed worldwide for her inspired and prolific flute playing as well as her marathon swimming feats – with ace violinist Luca Hart whose Grappelli-inspired improvisations has audiences in awe, and soulful cellist Ariella Caira who never fails to enchant with her stand-up cello. The SAMA-winning trio is joined by acclaimed guitar player and composer Mauritz Lotz (nicknamed by the SA Rock Encyclopedia as “Guitar Hero Extraordinaire”), pianist Jaconell Mouton – known for her work on Noot vir Noot and many international musical endeavours), the one and only Schalk Joubert who is undoubtedly one of SA’s busiest and most recognisable bassists, and Kevin Gibson who – often together with Joubert – has shared stages with many musical legends locally and abroad.

The program which never fails to enthral young and old includes innovative arrangements of Classical pieces like Handel’s Sarabande and the Can Can, soulful melodise such as AR Raman’s Mumbai Theme, and Mike Batt’s Caravans Theme, with breathtaking instrumental acrobatics expected in pieces like Asturias and Spain, locally inspired numbers including Mbube and Lisa se Klavier, as well as Sterling EQ / Mauritz Lotz originals, an Eastern European inspired pieces and, inevitably, a bit of Jethro Tull.